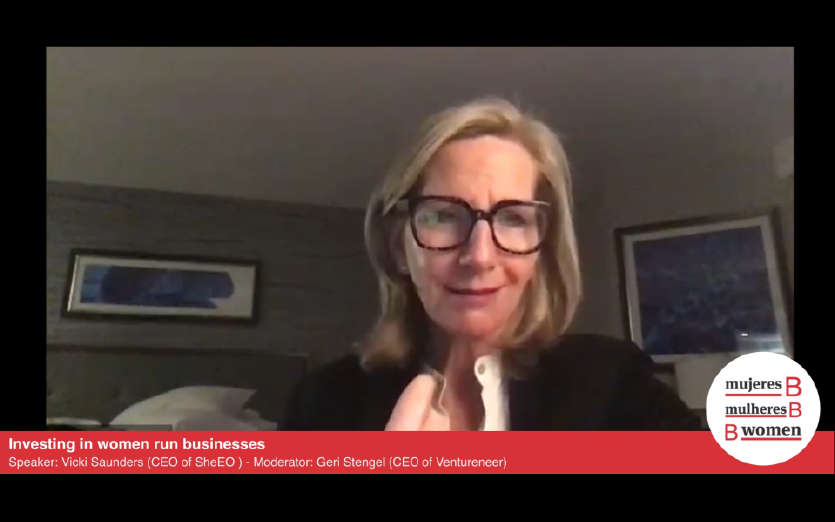 SheEO is a global community of radically generous women transforming how we fund, support, and celebrate women-led Ventures. The model brings together 500 women (called Activators) in each cohort, who contribute $1100 each as an Act of Radical Generosity. The money is pooled together and loaned out at 0% interest to five women-led Ventures selected by the Activators. The loans are paid back over 5 years and then loaned out again, creating a perpetual fund which we will pass on to our daughters, granddaughters, and nieces.

Since launching in 2015, 4000 SheEO Activators have collectively loaned out $4M in support of 53 Ventures creating a better world. SheEO Ventures are paying back their loans, experiencing triple-digit revenue growth and are aligned with 2+ of the UN Sustainable Development Goals.

Vicki Saunders is an entrepreneur, award-winning mentor, advisor to the next generation of change-makers and leading advocate for entrepreneurship as a way of creating positive transformation in the world. Prior to founding SheEO and #RadicalGenerosity, Vicki co-founded and ran ventures in Europe, Toronto and Silicon Valley and took a company public on the Toronto Stock Exchange. Vicki was named one of the 100 most influential leaders of 2015 from «EBW – Empowering A Billion Women» and in 2001, Vicki was selected as a Global Leader for Tomorrow by the World Economic Forum.

Women entrepreneurs from Europe and Latin America participated in this webinar. This cycle of videoconferences is organized by the B Women movement. A global network of women entrepreneurs that advocate for inclusive, regenerative and triple bottom-line economies that trust in the power of  partnerships and collaborate to advance gender equality and climate change agendas, three of the 17 Sustainable Development Goals.

You can relive our B Women Online Dialogues (in Spanish, English and Portuguese) by entering our YouTube channel

Do not miss the next dialogues by consulting our agenda HERE

END_OF_DOCUMENT_TOKEN_TO_BE_REPLACED

Sustainability in gender parity and fashion